The Town of Holland, working with Kevin over a 6-month period, adopted an update to its Comprehensive Plan on February 10th. The update contains a wealth of data and information the Town will use for guidance when creating policies and making decisions. The Future Land Use Map, for example, will provide direction when rezoning requests come before the Plan Commission and Town Board.

Throughout the process, Kevin did research and then in an open meeting format presented and explained findings and issues to Town officials, who then discussed the ramifications to the Town. Later, recommendations to address the most important issues were formulated and edited until officials were satisfied.

Noteworthy items in the update include the following: 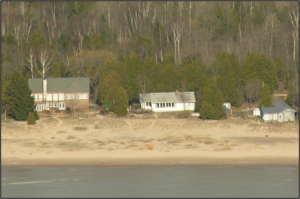 Most of this beach has disappeared due to high lake levels.
Photo: Wisconsin Shoreline Inventory and Oblique Viewer, 2007