Most of the town zoning maps in Sheboygan County were drawn in the early 1980s before the appearance of computerized mapping and detailed data sets like digital aerial photography, wetland boundaries, topographic elevation contours, and so forth were available as computerized overlays in a geographic information system (GIS).

As a result, when a property contained wetlands, floodplain, steep slopes, or other natural features that necessitated part of the property being zoned into a conservancy district like C-1,  the border of the natural feature was estimated using the data and tools of the time. Further, it was typically the practice to square off borders and use straight lines in order to make drafting easier and create a clean looking map. Although this was usually “good enough,” these factors often meant that a border drawn on the map didn’t precisely match what was actually on the ground. For example, a C-1 border that was fine for a small-scale zoning map might be dozens of feet off from the actual extent of a wetland or floodplain in the field. 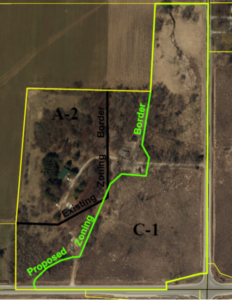 It would be a lot of work to revise a town-wide zoning map to adjust all of the C-1 conservancy borders to account for today’s improved data and technology, so most of the borders from 40 years ago remain the same. Most of the time this is not a problem, but now and then it can have a significant effect on a property owner’s development plans.

Just such a property owner recently contacted Kevin and asked for help. His property, pictured at right, is currently zoned A-2 Agricultural around the house, and C-1 Conservancy everywhere else—even though the natural features that originally led to the C-1 designation actually cover far less of the parcel.

Using 2019 aerial photography, the latest wetland mapping, and elevation contours, Kevin drafted a more accurate border for the C-1 portion. This was important because the property owner planned to tear down the existing sheds in the center of the parcel and replace them with a pole building. This would be allowable in A-2 but not in C-1.

Moving the zoning border to more accurately reflect the true conditions of the land will allow the owner a fuller and more reasonable use of the property.

Kevin explained all of these issues to the landowner and town officials. The plan commission voted to approve the proposed zoning border adjustment at its May meeting.

The landowner told Kevin, “I also want to say thank you for helping me out! It’s more than you would have to and I appreciate it a ton. It shows there are still good people out there that like to help out the community!”

The town clerk commented, “Thank you so much for helping him out, and especially creating those zoning maps…It made perfect sense.  I’ve never been a fan of having two zonings on a property, mainly due to the fact of how difficult it is to determine where those “lines” are.  If the boundaries follow the lay of the land, well then that’s easy, but just willy nilly like it’s been before, that disturbs me.”