At the request of the Waldo Pond Improvement Association, Inc., Kevin has begun updating the pond management plan he drafted in 2016. The Waldo Mill Pond is classified as an impoundment, which is an artificially created lake or reservoir usually characterized by stream inflow and always by a stream outlet. In this case, the inflow comes from the north and west via the Onion River and Waldo Creek; the outflow is the Onion River flowing southeast.

Because the inflow of an impoundment is slowed by a dam, many of the sediments, which may include fine soil particles, nutrients like phosphorus, and contaminants that have entered upstream from the impoundment and have been carried along by the relatively rapid stream flow, settle to the bottom when the stream enters the impoundment. This leads to 1) an ever more shallow impoundment due to premature filling in of the bottom with sediment, 2) high levels of nutrients that often promote excess plant growth, and 3) a concentration of contaminants that may be harmful to fish and wildlife. 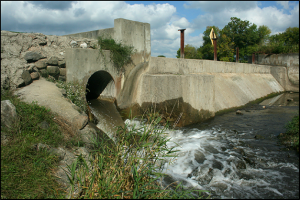 The presence of a dam on a river or stream also creates markedly different upstream and downstream water temperatures and fish habitats. A 2018 fish survey, for example, found brown trout in the cooler waters of the river upstream from the dam but none downstream in the warmer waters.

The dam itself is old, having been built in 1856, with parts having been repaired or replaced several times since then. A 2014 report by a consultant recommended adding an auxiliary spillway to lessen the risk of a dam failure, and the estimated annual maintenance cost to keep the dam in the satisfactory condition is $3,000.

Despite all of these issues, the Village of Waldo’s community plan identifies the 36-acre pond as an asset worthy of protection, and the Waldo Pond Improvement Association has the preservation of the pond as part of its mission statement. Both have invested time and money toward these goals. Their support of the dam and pond is at least partly based on the results of a 2007 local citizen opinion survey that showed a clear majority of respondents favored the continued presence of the dam and pond.

Nevertheless, it has been 13 years since the survey, and the challenges facing the dam and pond have only increased. Consequently, the Pond Association would like Kevin to do a new survey to see if residents are still in favor of keeping the dam and pond in spite of the increasing challenges and costs. Those results will be a key part of the information the Village Board considers as it makes future decisions regarding the preservation or removal of the dam and the fate of the pond.