From 2013 – 2015, Kevin worked with Town of Sherman officials to create a custom farmland preservation zoning ordinance. Since the strategies within this new ordinance had not been tried before, the state agency that oversees farmland preservation certification and tax credits for local farmers approved it with a contingency of a 5-year “check in” to see whether the ordinance was working as envisioned.

Besides any rezonings completely out of farmland preservation, the state agency was especially interested in the conversions from A-1 to A-2. Would the new A-2 lot disrupt the existing larger farm and/or would it contain nothing but a house, with all future agricultural potential gone? An analysis by Kevin of the four new lots, comparing 2009 aerial imagery with 2019 imagery (“before” and “after”), showed the following:

All four lots were at the edge of farm fields and in most cases close to the road so as to avoid disrupting the remainder of the agricultural operation. “Lot 2” is shown below. The ordinance seems to be working. 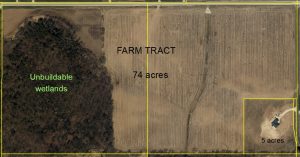