Kevin has continued to receive questions on a wide variety of local issues. Here is a recent question from a local village president, some interesting background information, and the answer to the question. 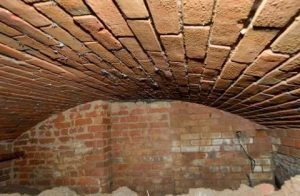 Q: Who would I talk to about what we can fill an abandoned cistern with?

Background:
Cisterns are small underground reservoirs for holding liquids, usually water. Their origin goes back thousands of years when they were constructed of stone or similar material and the water stored within them was typically used for irrigation, cooking, washing, etc. In the early history of the U.S. it was common for communities of all sizes to install a system of underground cisterns to provide a source of water for fire protection.

Cisterns in the Midwest were often built using bricks and filled with rainwater from gutters/downspouts directed at them from nearby homes. When the system of cisterns was replaced in the mid-1900s by municipal water systems with hydrants, the cisterns were either filled in or abandoned. Today, an old cistern will occasionally be rediscovered when communities do street or utility work, or other excavation. There may then be questions about what should be done with it. Are there regulations that apply?

The abandonment of wells, for example, is regulated in Wisconsin. They must be properly filled and sealed when they are removed from service, and this must be done by a licensed driller or pump installer using materials and methods as prescribed in section NR 812.26, Wisconsin Administrative Code. Cisterns, however, are fundamentally different from wells in that they do not intersect aquifers, and therefore do not create a direct pathway from contaminants on the land surface to the groundwater we drink.

Answer:
After doing some research, Kevin found a specialist within the WDNR who was able to provide some guidance. The specialist said that “NR 812 does not regulate cisterns, so as long as the cistern isn’t being filled in with something that can be construed as a contaminated substance, (which would be a different DNR program’s authority), I don’t believe you need any approval from the DNR…Certainly not our program.” Consequently, filling a cistern with uncontaminated materials such as sand, gravel, or busted concrete would be acceptable.

Sidenote 1: Cisterns are still used today to provide water for firefighting in remote areas. Today’s versions are often made of plastic, concrete, or similar material and may even include filters that allow them to be used as emergency sources of drinking water.

Sidenote 2: San Francisco still maintains a system of about 200 cisterns as a backup for fighting fires following an earthquake that ruptures municipal water lines.