Accessory buildings in a residential zoning district are buildings like a detached garage or a pole building that are secondary to the house, which is considered the main building on the lot. In the last few years the perception is growing in a few places that accessory buildings on some residential lots, especially in suburban fringe areas, have become larger and more numerous. Apparently, homeowners have more need for storage, or perhaps a small business or hobby has blossomed. (The photos below show examples of two types of accessory buildings that might be found on relatively small residential lots.)

On some properties, however, the accessory buildings have become so large and/or numerous that they may have begun to change the appearance and character of what is principally intended to be a residential lot. It’s possible that if enough of these accessory buildings are concentrated in a particular area, it could change the character of an entire neighborhood. Rather than  a quiet residential atmosphere, such a neighborhood can begin to take on more of an industrial or commercial appearance. 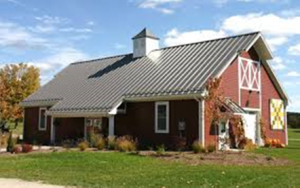 This past month, officials from two towns in Sheboygan County where accessory buildings appear to be increasing asked Kevin for suggestions on how to handle this issue.

Kevin’s first step was to examine the zoning ordinances of all 15 towns in the County to see how accessory buildings were currently being regulated, if at all.

Of the 15 towns, 9 did not regulate the size or number of accessory buildings in residential districts. Six of the towns, however, did indeed have limitations. Of these 6, three did so by using a maximum lot coverage percentage of about 30%. In other words, no more than 30% of the lot area could be taken up by the house and accessory buildings. This has been adopted into the ordinances to protect the open, uncrowded character of the area that landowners in past community surveys have indicated they value highly.

In addition to a maximum lot coverage percentage, the other three towns had limitations on the sizes and/or numbers of accessory buildings. Recognizing the need for flexibility, two of the three towns (Holland and Wilson) that have both sets of limitations have added a conditional use permit (CUP) option for a landowner wishing to exceed the limits. This CUP option is in lieu of seeking a variance to exceed the limits.

Kevin summarized what he found in his survey of the 15 town ordinances, and then explained the advantages and disadvantages of the CUP and variance options. The main difference is that when a variance is granted, that’s the end of it—the property is considered conforming. Whereas with a CUP a town sets conditions and can monitor those conditions into the future, sometimes with the ability to revoke the CUP if warranted.

Further discussions will take place at the plan commission level and recommendations for action, if any, will then go to the local town boards for final consideration.